Energy ITS
Vehicles emit CO2 while accelerating, decelerating and idling. In general, however, up to a speed of about 40-50km/h, the slower a vehicle is traveling the more CO2 it emits. Using ITS, traffic congestion can be reduced, which in turn will allow vehicles to move at more efficient speeds, thereby decreasing CO2 emissions.
In addition, if vehicles accelerate gradually and if speed fluctuations are reduced, fuel consumption can be reduced.

R&D for autonomous driving and platooning

Aiming for a future where vehicles can be driven in high density but in a coordinated way like a flock of birds or a school of fish, research and development for autonomous driving and platooning were conducted to help reduce energy consumption.
In FY2010, experimental driving tests were carried out using prototype vehicles to verify basic functionality and performance.
Moreover, in FY2012 demonstrative experiments using safety-,reliability- and performance-enhanced prototype vehicles were conducted for the public.

For automated platooning, it was necessary to drive on designated roads. Among the objectives were achieving energy efficiency, safety improvements and avoiding collisions with obstacles such as stopped vehicles.
Building on knowledge gained through previous research done on automated platooning,
this research and development was carried out based on a technological concept using data from highly accurate road maps and existing roadway infrastructure.

This project succeeded in developing automated truck platooning technologies for operating four trucks with an intervehicle spacing of 4 meters and traveling at a speed of 80 km/h.
The automated truck platooning technologies developed in the Energy-saving ITS Initiative for use on expressways are expected to be implemented as advanced next-generation driver assistance systems or for autonomous driving that includes ordinary roads. 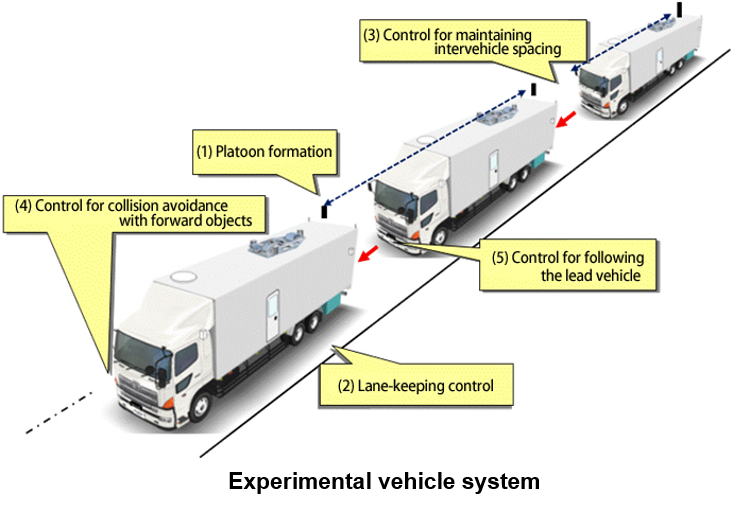